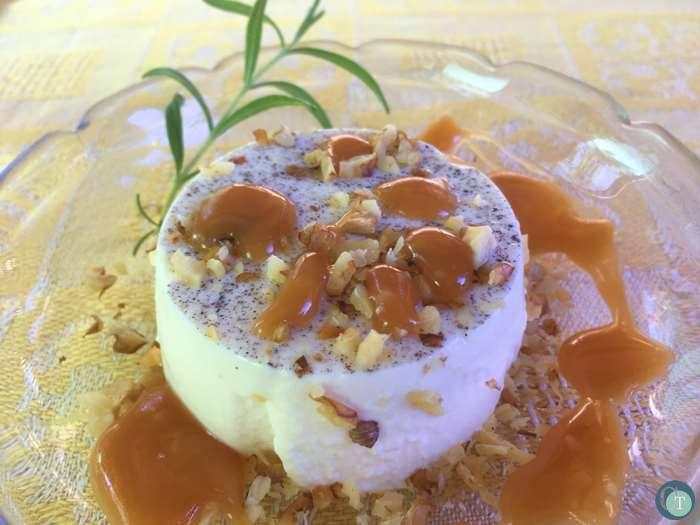 As we know the rosemary goes well with salty, fried meats. But did you know it works perfectly with desserts too? If you haven’t tasted the rosemary panna cotta yet, it’s high time to do so. It’s not only the rosemary that makes it special but also the lightly salty, homemade caramel sauce.

I usually use gelatin leaves, not gelatin powder so this recipe is also made with this. Soak 5 gelatin leaves into 4 tbsps of water (important the water is covering the leaves). Set them aside and let the leaves absorb some of the water and soften.

In a bowl boil the 3/4 cup of cream, 3/4 cup of brown sugar, 1 scraped vanilla bean (cut the vanilla bean in half lengthwise scrape off the seeds), a pinch of salt and 1 rosemary leaf. You can also use dried rosemary, fill it into the mesh-ball tea infuser.

During this time the gelatin has softened so you can add it to the boiled cream. Then bring to a boil again. After boiling remove from the heat and stir in 2 cups of milk. Take the rosemary leaf or the mesh-ball tea infuser out and pour the mass into non-stick silicone moulds or directly into cups in which it will be served. Place them in the fridge and wait for them to set.

While the panna cotta sets in the fridge, make the caramel sauce.
Heat the ingredients except for butter and cream. When the sugar is lightly browned add 3 tbsps of butter and pour 3/4 cup of cream on it and cook until thickened. It is up to you how rich consistent caramel sauce you want.

When the sauce has cooled slightly pour it over the panna cotta, sprinkle with toasted walnuts and enjoy! 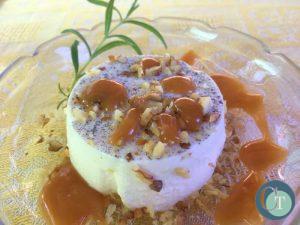 If you haven't tasted the rosemary panna cotta yet, it's high time to do so. It's not only the rosemary that makes it special but also homemade caramel sauce.
Pin Recipe Print Recipe (please consider the environment before printing)
Cook Time 20 mins
Total Time 20 mins
Course Dessert
Recipe Typehomemade, quick
Servings 4

For the Panna Cotta

For the Caramel Sauce

The above figures assume a cup with a volume of 250 ml.

Cavalcade Of Taste is a food blog with healthy, easy to make recipes with tips and easily available food ingredients that you will love and enjoy. Look it and cook it!