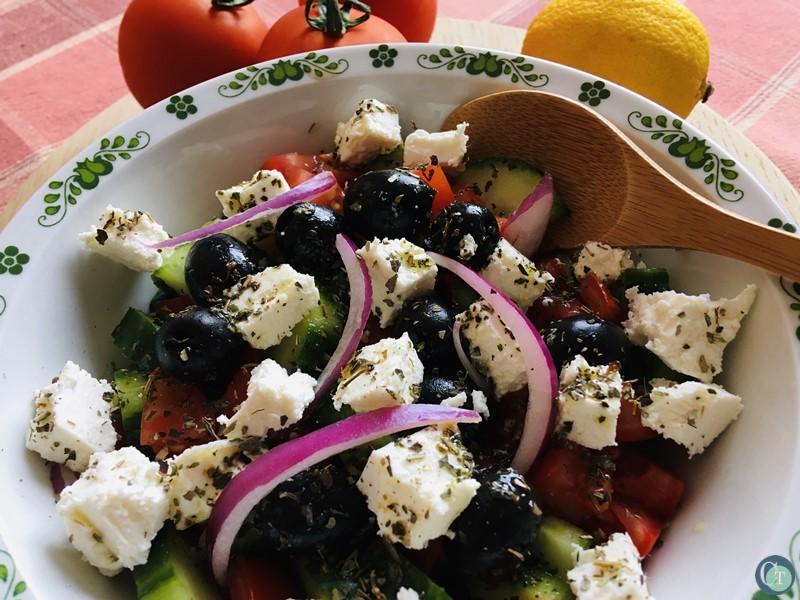 In salads, I like that they can be consumed on their own and as a side dish too. The original Greek salad is just like that too. Besides they are easy to make, healthy and you can be varied. Greek salad is one of the most popular salads because of its characteristic taste.

Let’s see how the original Greek Salad is made

Let’s start by washing and peeling the vegetables.

Use ripe tomatoes. Cut into large chunks or irregular wedges. (If you don’t consume the salad that day, you can use cherry tomatoes because they release less water into the salad the next day than larger tomatoes would).

Cut the cucumber into quarter into 1/2-inch-thick or chop it roughly.

I usually cut the bell pepper in half lengthwise then slice thinly but you can chop it 1-inch pieces. If the pepper isn’t large you can thinly slice it into rings too.

Finally, place everything in a large salad dish and add pitted kalamata olives or black olives to your liking. Sprinkle with a big pinch of dried oregano (at the end you can serve and garnish with leaves of basil). Season with a pinch of salt if it needs. Be careful with salt, because feta cheese is salty.

Pour one and a half teaspoons of lemon juice or 1-2 tablespoons of red wine vinegar into the salad. Finally, mix them gently by hand.

After mixing, sprinkle large blocks of creamy feta cheese on top of the salad or cut the feta cheese into 1/2-inch-thick (don’t crumble it, leave it in large pieces).

This salad full of colour and flavour easily work as a side dish to grilled chickens, roast meats, fish, burgers or consume on its own. 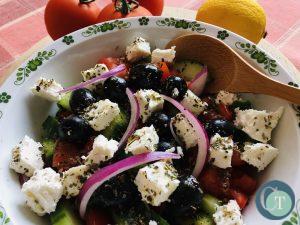 The above figures assume a cup with a volume of 250 ml.

Cavalcade Of Taste is a food blog with healthy, easy to make recipes with tips and easily available food ingredients that you will love and enjoy. Look it and cook it!